Getting up and close to Nature 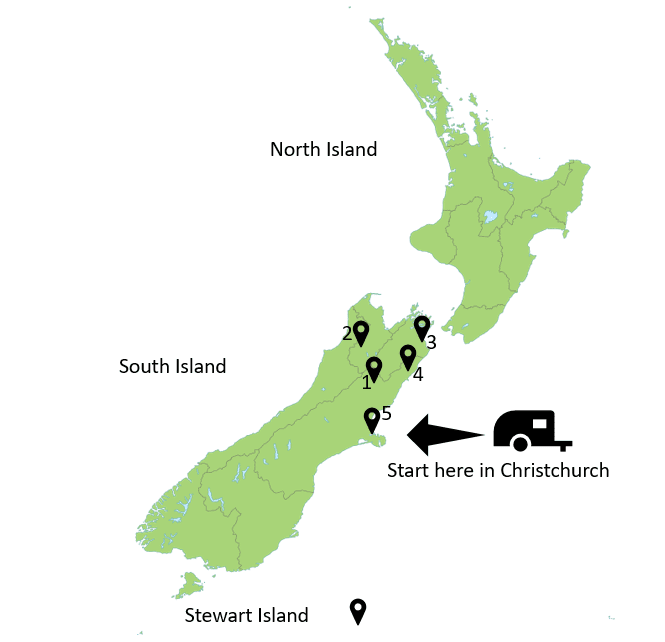 Hot springs, outdoor adventures and vineyards lend a pleasurable mix of indulgence and challenge to this itinerary. Make your way north to the spa town of Hanmer Springs where you can enjoy a soak in one of the amazing hot tubs or relax with a massage. Then head to St Arnaud for some adventure and up to Blenheim to relax at one of the many vineyards.  Return home via Kaikoura when you could have an encounter with whales, dolphins, seals and ocean-going sea birds.

Christchurch is traditionally New Zealand’s most English city – imagined, laid out, planned and even settled by decree over in England. It was built around its Christ Church Cathedral and Four Avenues, furnished with the University of Canterbury and Christ’s College, peopled by the first four ships, and fitted out with Neo Gothic architecture and glorious English gardens; a bit of old England in the South Pacific. Of course, now, it is as Kiwi as anywhere in New Zealand, and a vibrant, international place with its own flair and style. So, plan to spend the day enjoying this everchanging locale.

Christchurch is the South Island’s largest city, known for its beautiful public gardens, old world charm and architecture, and its quaint and very walkable city centre. Much of this changed in the 2011 earthquakes when so much of the city was lost. However, the city is rising to the challenges, quite literally, and it is now home to funky and unique pop up malls, dozens of new buildings, high street, designer and boutique shops, a world class art gallery and museum, and restaurants galore.  Many of its heritage buildings have been restored, the beautiful Botanic Gardens remain, and the trams have returned to its streets. Take a punt down the Avon, check out the new civic areas along the river, enjoy the unique facades of New Regent Street, or go for a run at Hagley Park. Make sure you check out the transitional cardboard cathedral in the city centre, and the Margaret Mahy playground, designed with the help of the children of New Zealand to be the biggest and best play space in the country.

Outside of the city, Orana Wildlife Park hosts New Zealand’s only gorilla encounter, and you may find a kiwi or two of the feathered kind both here and at Willowbank Nature Reserve, where you can also take in a Maori Cultural performance. For a bit of history, head out to Ferrymead, a purpose built 19th century village, where you can experience what colonial life was like for early inhabitants. Once there, spend some time at the shore at Sumner and Redcliffs and enjoy some fish and chips on the beach.

The trip north takes you past the beautiful beaches of the East Coast of Canterbury, with surf, scenic views, and places to stop for a stroll and a cup of tea. Heading inward takes visitors into Waipara, which has developed into one of the premier wine regions of the South Island. Lots of choices here for lunch.

Hanmer is famous for its hot springs, spas and amazing pool complex. It’s also a great town for shopping, eating, enjoying a coffee or two, and its outdoor activities such as walking and biking.

From Hanmer Springs, Lewis Pass takes you through a new landscape of forest and into Maruia Springs, another option for a hot spa soak. Head on to Murchison Forest and listen for the largest flock of native parakeets around. In Murchison, stop for a break and learn about the local history at the museum.

Head to St Arnaud on the shores of Lake Rotoiti and enjoy the views of the mountains. From here, check out the Nelson Lakes National Park. There’s so much to do here, from hiking to kayaking to rafting to horse riding, to just looking around and relaxing by the lakes.

Enjoy the ride along the banks of the Wairau River and stop for lunch along the way. Soon you will arrive in Wine Country. Vineyards abound, often accompanied by cafes and gourmet restaurants as well as wine tasting tours. The town of Blenheim is the hub of wine-growing Marlborough.  There are more than 20 wineries within driving distance of the town and plenty to entertain you in the town itself.

State Highway 1 takes you through the coastal foothills, and then out into the picturesque Awatere Valley.  Enjoy the views along the coastline and take a moment to pull over for scenery and a few photo opportunities. Kaikoura translates into English as a good place to eat kai (crayfish) koura and indeed it is! Don’t miss the chance to sample some of the freshest shellfish and crustaceans around. Venture onto the coastal walkway and you could see sperm whales, dusky dolphins, fur seals and albatross play in the waters off shore. Alternatively, join them in their own environment and take one of the many oceanic tours on offer.  Kaikoura experienced major earthquakes in 2016, which disrupted their roads and some attractions. Check http://www.journeys.nzta.govt.nz/traffic/regions/11 for live updates to be sure your road trip will be a safe and enjoyable one.

After Kaikoura, the trip south takes you along the edge of the rugged coastal ranges. There are beaches galore and small towns to stop for coffee, tea, local crafts, picnic supplies and views of the wild coast.

Back in Christchurch, head for the places you didn’t have time for on the first day here, or consider a day or overnight trip out to Akaroa on Banks Peninsula (1.5h). Akaroa has a surprisingly French history (The French tried to colonise New Zealand, but were a little bit too late. The first settlers sent over to claim the place stayed, and their French traditions, and street names, have remained). In Akaroa, start the day with a traditional croissant and coffee at one of the French-inspired delis or bakeries before taking in the spectacular harbour or swimming with dolphins with one of the touring companies.

The main street of town, which winds along the beach, has dozens of interesting boutiques, cafes, restaurants, galleries, and attractions and was recently voted favourite port by the cruise ships which now dock here almost year-round. A Must Do is to head up the hill to The Giant’s House where terraced gardens with sculptures and mosaics are a creative feast and wonderful experience. This really is unique, and a not to be missed, excursion. Plan to take lots of photos!

Further over the hill are lovely little out of the way bays and inlets. If you can manage the caravan over the slightly hair raising hills and turns, you’ll find perfect camping spots. Find your way to the Okains Bay museum, to see one of the best collections of Maori art and artefacts in New Zealand, presented in a humble but respectful environment. The main road back to Christchurch, Highway 75, will take you through Little River, a charming town with a small art gallery and cafes.

We want you to have the best holiday ever. Book with us.  We might be small, but we care. We think the best way to see our beautiful country is by caravan.  Our caravans are completely self-sufficient and allow you to go off grid. You are not bound by the constraints of camping grounds and available spots. The choice is yours.

We want you to be warm and comfortable.  We want to create easy to live single storey spaces where you have the option to connect to services and operate off grid.  Our fully insulated units come equipped with solar panels and gas electric options, along with composting toilet options so you can be self contained.