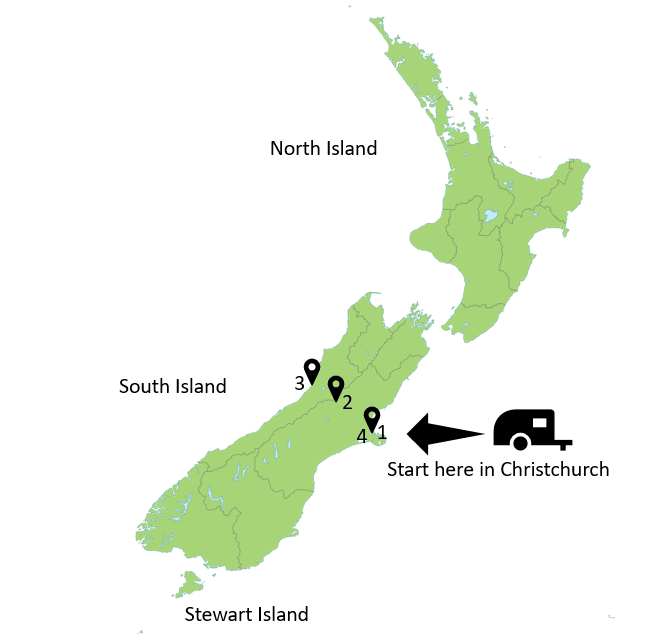 Christchurch is traditionally New Zealand’s most English city – imagined, laid out, planned and even settled by decree over in England. It was built around its Christ Church Cathedral and Four Avenues, furnished with the University of Canterbury and Christ’s College, peopled by the first four ships, and fitted out with Neo Gothic architecture and glorious English gardens; a bit of old England in the South Pacific.

Christchurch is the South Island’s largest city, known for its beautiful public gardens, old world charm and architecture, and its quaint and very walkable city centre. Much of this changed in the 2011 earthquakes when so much of the city was lost. However, the city is rising to the challenges, quite literally, and it is now home to funky and unique pop up malls, dozens of new buildings, high street, designer and boutique shops, a world class art gallery and museum, and restaurants galore.

Many of its heritage buildings have been restored, the beautiful Botanic Gardens remain, and the trams have returned to its streets. Take a punt down the Avon, check out the new civic areas along the river, enjoy the unique facades of New Regent Street, or go for a run at Hagley Park. Make sure you check out the transitional cardboard cathedral in the city centre and the Margaret Mahy playground, designed with the help of the children of New Zealand to be the biggest and best play space in the country.

Outside of the city, Orana Wildlife Park hosts New Zealand’s only gorilla encounter, and you may find a kiwi or two of the feathered kind both here and at Willowbank Nature reserve, where you can also take in a Maori Cultural performance. For a bit of history, head out to Ferrymead, a purpose built 19th century village, where you can experience what colonial life was like for early inhabitants. Once there, spend some time at the shore at Sumner and Redcliffs and enjoy some fish and chips on the beach.

Head out from Christchurch and into the Canterbury Plains, a land of farms, rivers, and endless sky.  Stop for lunch at the famous Sheffield Pie Shop or the Darfield Bakery.
The road slowly begins to wind its way up into the foothills of the Southern Alps. Stop at Castle Hill and its ancient monolithic rock formations. They’re loved by rock climbers, revered by local Maori, enjoyed by school groups galore, and on a clear day offer amazing views and unusual scenery.

Now head onto Arthur’s Pass, a wonder of both sightseeing and engineering.  Stop at the township for a hot drink and to have a look at the view. There is a range of walking trails here, from a ten-minute peek around, to full days of tramping. Be wary of leaving any food around, and keep an eye on your caravan – the large mountain parrots here, called kea, are very curious, very clever, and a little too friendly at times!

On the way north toward Greymouth, stop for a cup of tea while you admire the view at Otira lookout, one of the more famous scenes in New Zealand due to its rugged terrain and amazing viaduct. Descend the hills and you’ll find yourself officially west of the divide and in one of the South Island’s lushest locations: the rugged West Coast, with tracts of rainforest and far fewer people.  West Coasters are a breed apart and proud of their laid-back, adaptable and openminded outlook on life. The area is famous for its gold mining history, when whole towns popped up overnight in the mid 19th century, their inhabitants attracted by the lure of gold and the work available in the many mines in the area. The gold ran out, but many of the people stayed and built lives in the challenging climate and landscape.

Greymouth has museums dedicated to its history and attractions such as Shanty Town, where visitors can try their luck at panning for gold while learning about gold mining history. Long before gold was discovered, the Maori knew the area as a source of pounamu/greenstone, a beautiful, hard, stone both sacred and useful to them. The West Coast is a great place to purchase pounamu, but it is best to buy it as a gift for others, and not for yourself.

Punakaiki, or Pancake Rocks, is an attraction worth visiting, just a short drive from Greymouth. The visitors’ centre is excellent and the walk to view the rocks is easy, pleasant, and full of photo opportunities.

From here you can choose to retrace your steps or spend another night and enjoy a scenic return trip via the Lewis Pass. This small detour will be worthwhile for the scenery alone.

If you choose to stay the night in Greymouth, consider a day trip north to Westport, and beyond and up to Deniston, a historic mining town at the top of the hill. Read more about this fascinating New Zealand story as you go along your trip and enjoy the views and small towns along the wild West Coast.